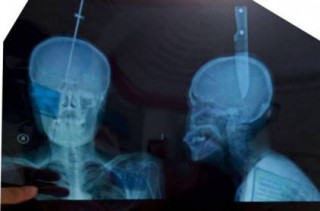 This is amazing – if you didn’t have this news post – you wouldn’t believe it happened.

A woman with a knife impaled in her head walked into a hospital in China and spoke to medical staff.

Dramatic x-ray images (below) show how Liu Yanya presented herself to doctors in the north-east city of Changchun.

The 57-year-old’s daughter found her mum with the full 11cm blade in her head after a fall, the UK’s Metro newspaper reported.

“I heard a loud ‘pang’ sound and when I ran out I found my mother sitting under the stairs with a long knife in head,” her daughter Wang Xue said.

“The blade had gone all the way in leaving only the black handle outside.”

But Yanya was still able to walk and talk, despite the serious injury.

“The more amazing thing is when the patient came in, she was still in a clear mind, and could walk and speak,” said chief surgeon Sun Yang, who removed the blade.

Metro reported that Wang and husband Sun Zhonghua will have to sell their house to pay medical bills.

The 11cm blade after it was removed. (Picture: www.rondoniadinamica.com)

The researchers were primarily targeting the food processing industry – not the regular housewife in the kitchen. The oil that was used, Cinnamomum cassia oil, is generally available from many suppliers, especially on the web. A good idea would be to consider using it on foods where bacteria formations may be suspect. “It can also be added ...