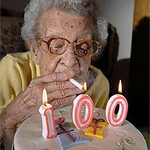 The U.S. Census Bureau view on the future of longevity is that life expectancy in the United States will be in the mid-80s by 2050 (up from 77.85 in 2006) and will top out eventually in the low 90s, barring major scientific advances that can change the rate of human aging itself, as opposed to merely treating the effects of aging as is done today. The Census Bureau also predicted that the United States would have 5.3 million people aged over 100 in 2100. The United Nations has also made projections far out into the future, up to 2300, at which point it projects that life expectancies in most developed countries will be between 100 and 106 years and still rising, though more and more slowly than before.

Below is an interview with Nir Barzilai MD by Medscape, titled The Genetics of Living Longer, Healthier Lives, done on April 01, 2014. Dr. Barzilai, working at Albert Einstein College of Medicine, specializes in the biology of aging. His research has been admired and broadly followed by academicians in this field. You will find his comments of interest, especially his reference to resveratrol (which he calls a drug). Read on and enjoy.

At the Future of Genomic Medicine VII conference in March 2014, leading experts in genomic research and clinical application discussed the expanding influence of genomics on the practice of medicine. Medscape asked Nir Barzilai, MD, Director of the Institute for Aging Research at the Albert Einstein College of Medicine in New York, to offer insight on what research on the genetic makeup of very old healthy individuals might teach us about preventing age-related diseases.

Medscape: Why study the genetic makeup of centenarians?

Dr. Barzilai: The reason we went to individuals who are 100 years old is that we assumed their aging was delayed. We know that some people look younger than their age and some people look older than their age, but we never used that to discover the biology of aging in a way that might lead us to develop a strategy and develop a drug that will allow us not to live longer, but to avoid disease.

So we went to those who were 100 years old and those who consider themselves healthy. (By the way, not everybody was right, but they are basically a healthy population.) They had to be living independently at age 95, which is an indication of health, too. We looked at it as a genetic problem, and we approached it in a genetic way. When you approach something in a genetic way, you have to do a good phenotype. You have to spend time with the person, get good information about their health and other medical information, and then do whatever you can do with the genetics in order to understand its foundation and why they are doing better than others.

We found, so far, several genotypes that have a functional relevance. They actually change something in the body that are associated with longevity. We phenotyped them, studied them in the laboratory, validated them with other populations, and discovered that they are important to the individuals who carry them.

Medscape: What role do these genes play in earlier stages of life?

Dr. Barzilai: It is a good question. Is it possible that those genes for longevity are actually genes that affect good function early in life? There are 2 sides to that.

One side is that some of the genes that are associated with longevity are actually diminishing growth (which is often a protective factor in nature). Some of these people have mutations that make them a little bit shorter, and they have other features of stunted growth. The question is whether these people had some problem with later growth development — which could be good or bad, depending on the social situation.

On the other hand, there are indications from studies in models with some of these longevity genes — for example, in the nematode, the worm in which we study aging — that they are actually functioning better when they are young and this better functioning stays when they get very old. Those are all very important pieces of information to gather.

Medscape: Where is research in this field headed?

Dr. Barzilai: There are 2 ways to move the field forward. First, our success has been, so far, by looking at a certain phenotype and looking at the genes that are associated with the phenotype. So we had the candidate gene approach, but we want to move to an unbiased approach. We want to sequence the genome of the centenarians and let the sequence tell us what the components are that make those people live longer. That is one approach. The technology will allow us to see the answers rather than finding what we think we know.

The second part of this is that we need not only to show the gene’s function and that it is relevant to outcomes, but we also want to use it to develop medications that will potentially delay aging and will really have a longevity dividend.

We have several examples in the field — based on my research or others’ research — where companies have developed drugs. The most famous is resveratrol, or the biological drug of that, the SIRT1 activator, which GlaxoSmithKline bought. They are looking for indications, but it is mainstream in aging.

Also, in part because of my genetic research, there are 2 companies that are developing drugs for age-related diseases. One is Merck, which is developing a CETP inhibitor, and the other is Isis, which is developing an APOC3 inhibitor. I founded a biotech company that is studying another set of peptides, coming from the mitochondria, that decline with aging; if we replace them, they have an effect on many age-related diseases.

So for the future, it is a matter of resources; these discoveries are going to be immediately relevant to drug development.

Sugar is the generalized name for sweet, short-chain, soluble carbohydrates, many of which are used in food. They are carbohydrates, composed of carbon, hydrogen, and oxygen. There are various types of sugar derived from different sources. Simple sugars are called monosaccharides and include glucose (also known as dextrose), fructose and galactose. ...