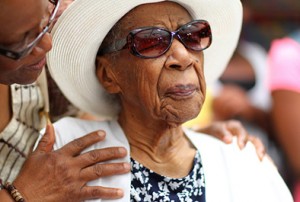 We often wonder how many real older people are around and what do they have to say. Here is a newsy story about just such a person and some surprising things she has to relate.

BROOKLYN NY (PIX11) – 1899 was quite the year. It’s when Staten Island and Queens officially became part of New York City, the paper clip was introduced, and Miss Susannah Mushatt Jones made her debut.

115 years later, all are still alive and well, but Miss Susie is the one with reason to celebrate.
The Brooklyn community that she has called home for the past several decades gathered at the Vandalia Senior Center in Brooklyn to honor the super centenarian to celebrate her 115th birthday.

Miss Susie has a lot to brag about. She is New York City’s oldest resident, has lived in the 19th, 20th, and 21st centuries, and she has more than 100 nieces and nephews.

“You know what she does, she eats bacon,” Jones’ Goddaughter Valerie Price told PIX11 News last year, shedding light on how Miss Susie has lasted so long. “She eats bacon every single morning. Now I don’t advocate that because I don’t even eat it myself but that’s what it is.”

Today, Miss Susie admits that abstaining from alcohol, smoking, and partying probably helped her live as long as she has.

To put everything in perspective, Miss Susie has survived two World Wars, 22 U.S. presidents, the Great Depression, the Cold War, the birth of the telephone, radio, TV and internet, the Civil Rights Movement, and every Super Bowl and World Series ever played.

Fingers are increasingly pointing to not having enough exercise as a major contributing partner to many ailments. This article shows its effects on cardiovascular health. A recent study conducted by researchers from Stanford University in California found that sedentary lifestyle and not caloric intake is primarily responsible for increased obesity ...