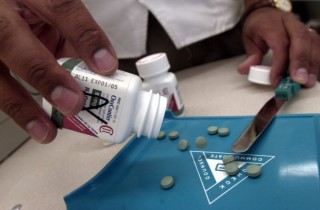 The prescription medicine OxyContin is displayed in 2001 at a Walgreens drugstore in Brookline, Mass. (Darren McCollester/Getty Images)

Two counties in California — Orange and Santa Clara — are suing five major drug companies, accusing them of causing the growing prescription drug epidemic across the country.

The complaint, filed on behalf of the state of California, accuses the companies, which make painkilling drugs such as Oxy­Con­tin, of deceptive marketing. The lawsuit seeks financial damages.

“They’re FDA approved for specific purposes, like to treat cancer pain and for palliative care at the end of life. They’re certainly not approved for just regular treatment of pain, and they would not have a market for that because of the addictive nature of these drugs. People understand that they shouldn’t — in general, people and doctors understand that they shouldn’t be taking these kind of opium derived drugs just for the ordinary attempt to control pain. And so what’s happened here is, in order to expand the market, these companies have engaged in a campaign of deceptive advertising to convince doctors and these other people that these drugs are not what they really are. They try to convince them that they’re not — or, in fact, have convinced them that they’re not addictive, that they don’t have these qualities of requiring greater and greater use to get therapeutic result. And as a result of that, many, many people have become addicted, and often times, people even go from the drugs, the prescribed drugs, to actual heroin.”

Rackauckas on the rise of opioid addiction in Orange County

“We’re seeing many addictions, to begin with, and that’s an impact on the public health in our county. But in addition to that, we’re seeing overdoses. I mean, we’re having an overdose death by heroin or a heroin derivative-type drug every other day…so it’s really something that’s become epidemic.”

Cohen on how the lawsuit could play out

“This is a very innovative lawsuit, and I think the real question is whether they’re kind of taking a page from the tobacco playbook. That was a fairly successful, if hard fought, kind of war. It got many states involved and it ultimately ended in a settlement. So the real question is whether they’ll have that kind of success, or whether they instead will look more like the public health lawsuits brought among the fast food industry or the gun industry, which really haven’t gone anywhere.”

Yes, it’s getting out the grill time. Make sure you have everything you need ready, and in good condition. You don’t wan’t to be running around on Memorial day trying to find some needed utensil. Get ready now by reviewing this helpful list. With the smells of charcoal and propane beginning to perfume backyards across the nation, ...