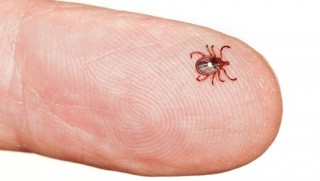 Tick bites can be annoying, and in some cases, they can even bring potentially dangerous health issues to mind–including Lyme disease and Rocky Mountain spotted fever. However, did you know some types of tick bites could actually make you allergic to red meat? Doctors across the country have noticed a surge in meat allergies, and an insect knick-named after the state of Texas may be to blame.

This bizarre problem was only discovered a few years ago but is growing as the ticks spread from the Southwest and the East to more parts of the United States. In some cases, eating a burger or a steak has landed people in the hospital with severe allergic reactions.

Few patients seem aware of the risk, and even doctors are slow to recognize it. As one allergist who has seen 200 cases on New York’s Long Island said, “Why would someone think they’re allergic to meat when they’ve been eating it their whole life?”

The culprit is the Lone Star tick, named for Texas, a state famous for meaty barbecues. The tick is now found throughout the South and the eastern half of the United States.

Researchers think some other types of ticks also might cause meat allergies; cases have been reported in Australia, France, Germany, Sweden, Spain, Japan and Korea.

Here’s how it happens: The bugs harbor a sugar that humans don’t have, called alpha-gal. The sugar is also is found in red meat – beef, pork, venison, rabbit – and even some dairy products. It’s usually fine when people encounter it through food that gets digested.

But a tick bite triggers an immune system response, and in that high-alert state, the body perceives the sugar the tick transmitted to the victim’s bloodstream and skin as a foreign substance, and makes antibodies to it. That sets the stage for an allergic reaction the next time the person eats red meat and encounters the sugar.
article source: http://www.aol.com/article/2014/08/07/bad-bite-a-tick-can-make-you-allergic-to-red-meat/20943592/

The good news is that you don’t need to be a fitness buff to get started with high intensity training. In fact, even if you sit at a desk all day – you can enjoy the amazing benefits of this form of exercise. All it takes is a little knowledge of what to do, set aside some area to do it, and keep at it, even for a little bit of time each ...