Can Obesity Cut Years Of Life? 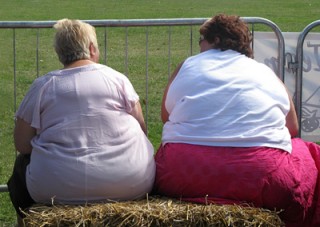 Obesity Cuts HOW Many Years of Life?

We see it all around us. People are simply eating more and more – exercising less and less – and getting sicker and sicker. A particular trouble spot is the obesity epidemic. This study concerns the consequenses of winding up so grossly overweight. It is however important to also find out about the causes and the remedies.

As your weight increases, so do your risks for developing heart disease, diabetes and cancer. Add it up and, severe obesity can cut your life short by as much as 14 years, reports HealthDay News of a study from the U.S. National Cancer Institute. That’s a lot of living you won’t get to do.

The study: Led by research fellow Cari Kitahara, the team analyzed data from 20 previous studies that took place over a 30-year period with a total of 10,000 severely obese people who had never smoked or had any chronic disease. The goal was to determine the relationship between body mass index (BMI) and the risk of death from heart disease, cancer or type 2 diabetes. The severely obese people were compared to 304,000 normal weight adults.

The results: People with a BMI of 40 or higher, which is considered severe obesity, have a death rate that is 2.5 times higher than adults of normal weight. This translates to a shorter lifespan in the range of 6.5 to 13.7 years, which is the same toll caused by smoking.

Heart disease was the top cause of death among the severely obese, followed by cancer, type 2 diabetes, kidney disease and liver disease. The risk of dying increased with the amount of weight.

The takeaway: If you are already severely obese, it is not clear if losing weight will help improve your lifespan; however, not becoming obese in the first place will extend your life.

Surprise: People with higher levels of brown fat have a reduced risk for obesity and diabetes, a new study suggests. This fat is l present in adults in the upper chest and neck

“This is good news for overweight and obese people,” Labros Sidossis, a professor of internal medicine in the division of geriatric medicine at the University of Texas Medical Branch at Galveston, said in a university news release. “This is great news for people with insulin resistance and diabetes, and suggests that brown fat may prove to be an important anti-diabetic tissue.” But there is much research to be done with this expectation.

Previous research has suggested that brown fat plays a role in regulating body temperature, according to the U.S. National Institutes of Health.

Can You Change Your Life With 2 Simple Actions?