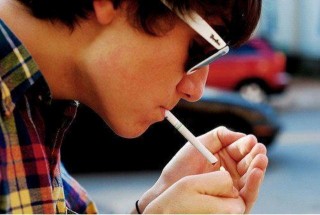 Ever take a whiff of a smoker’s hair and feel faint from the pungent scent of cigarette smoke? Or perhaps you have stepped into an elevator and wondered why it smells like someone has lit up when there is not asmoker in sight. Welcome to the world of third-hand smoke.“Third-hand smoke is tobacco smoke contamination that remains after the cigarette has been extinguished,” says Jonathan Winickoff, a pediatrician at the Dana–Farber/Harvard Cancer Center in Boston and author of a study on the new phenomenon published in the journalPediatrics. According to the study, a large number of people, particularly smokers, have no idea that third-hand smoke—the cocktail of toxins that linger in carpets, sofas, clothes and other materials hours or even days after a cigarette is put out—is a health hazard for infants and children. Of the 1,500 smokers and nonsmokers Winickoff surveyed, the vast majority agreed thatsecond-hand smoke is dangerous. But when asked whether they agreed with the statement, “Breathing air in a room today where people smoked yesterday can harm the health of infants and children,” only 65 percent of nonsmokers and 43 percent of smokers answered “yes.”

It’s not just first hand and second hand tobacco smoke that’s dangerous. It turns out that “third hand” tobacco smoke can be just as deadly. Scientists have highlighted the potential cancer risk in non-smokers of tobacco smoke gases and particles deposited to surfaces and dust in the home.

“The risks of tobacco exposure do not end when a cigarette is extinguished,” said Jacqueline Hamilton, lead investigator, in a news release. “Non-smokers, especially children, are also at risk through contact with surfaces and dust contaminated with residual smoke gases and particles, the so-called third hand smoke. This risk should not be overlooked and its impact should be included in future educational programs and tobacco-related public health policies.”

The researchers collected dust samples from private homes occupied by both smokers and non-smokers. After examining the dust, they estimated the cancer risk by applying the most recent toxicology information.

What did they find? It turns out that the cancer risks exceeded the limit recommended by the U.S. Environmental Protection Agency (EPA) in three quarters of the smokers’ homes and two thirds of non-smokers’ homes. The maximum risk predicted from third hand smoke levels in a smoker occupied home could be equated to one extra cancer case per one thousand population exposed.

“Over 40 percent of children have at least one smoking parent and whereas there is a general public awareness about the harms of second hand smoke, there is little knowledge about the dangers of third hand smoke,” said Alastair Lewis of the National Center for Atmospheric Science. “Carcinogenic materials can be passed from smokers to non-smokers during shared contact, for example between clothes and surfaces and also enter homes via airborne transport of cigarette smoke.”

The findings reveal the importance of cutting down on smoking not only in public, but also at home. Third hand smoke is a real issue that could impact children and families.

The findings are published in the journal Environment International.
article source: http://www.scienceworldreport.com/articles/16071/20140716/third-hand-tobacco-smoke-pose-significant-health-risks-home.htm

Does Race Matter In Benefiting From A Mediterranean Diet?

There is quite a bit of research highlighting the broad health benefits that ensue when consuming a rich Mediterranean diet. But a new study found that the impact of this diet differs among a race-specific population. The study found: “In a population of initially well-functioning older adults, we found a significant correlation between strong ...