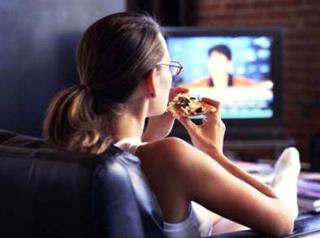 We thought that the problem with sitting and watching TV was exercise deprivation. Turns out there are more problems – with certain types of TV shows – read on.

Next time you watch television, pick something exciting to turn on—a new study reveals that watching boring shows can actually make you eat more than you would if you were watching a nail-biting drama or knee-slapping comedy.

The recently published study from Sweden followed 18 women while they snacked and channel surfed and found some surprising results. Researchers had the women watch an “engaging” TV comedy show, view a “boring” recorded art lecture and read a text (for the control condition), all with access to healthy and unhealthy snacks. They found that women watching boring shows ate more food than those watching engaging ones, and not just a little more – a whopping 52 percent more! Those watching engaging shows ate less food than even the control group, and researchers now question whether it is the type of content we are watching, rather than simply watching TV, that is a major factor in our snacking habits.

The study did recognize that several interesting findings, including the overarching preference for the healthy grapes over the high-calorie M&M’s across all conditions, may be due to to the pool of participants consisting of young, educated women with low BMIs who typically exercise restrained eating habits.

Watch the video above to get the full scoop on the new study and why researchers believe we eat more when we’re not entertained – all the more reason to watch Orange Is the New Black or catch up on Breaking Bad.

Here are some useful tips:

Watch a funny film. A Vanderbilt University study found laughing burns 20 percent more calories when compared to not laughing, and 15 minutes of giggling can burn the amount of calories found in two Hershey’s Kisses!

Watch a football game. Whether on your couch or at the bar, watching a three hour-long football game can burn more than 200 calories – that’s just over the calories found in a 12 oz. craft beer! That’s great news for World Cup fans!

Watch TV while working out. Work up a sweat while catching up on your favorite shows! Netflix created a fun infographicthat shows many calories you can lose by show; burn 117 calories while biking to an episode ofNew Girl or about 17,500 calories while marathoning Breaking Bad from a treadmill!

Watch a horror film. A University of Westminster study found watching a 90-minute horror film can burn up to 113 calories, the equivalent of a chocolate bar. Next time you’re watching The Walking Dead, try keeping your eyes open the entire episode!

Try kissing! Did you know that kissing burns two to three calories per minute! A ten minute make-out session is the equivalent of a handful of strawberries.