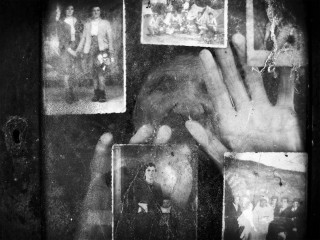 As the disease advances, symptoms can include confusion, irritability, aggression, mood swings, trouble with language, and long-term memory loss. As the person’s condition declines they often withdraw from family and society. Gradually, bodily functions are lost, ultimately leading to death. Since the disease is different for each individual, predicting how it will affect the person is difficult. AD develops for an unknown and variable amount of time before becoming fully apparent, and it can progress undiagnosed for years. On average, the life expectancy following diagnosis is approximately seven years. Fewer than 3% of individuals live more than 14 years after diagnosis. AD is classified as a neurodegenerative disorder. The cause and progression of the disease are not well understood; it is associated with plaques and tangles in the brain.

In a post for National Geographic, published on April 7, 2014 (link below), Diane Cole reports that researchers now claim that  Alzheimer’s symptoms, such as memory loss, actually appear much later than the actual onset of the disease. Alzheimer’s is a disease that currently affects about 35 million people worldwide, including some five million Americans—numbers that are expected to grow larger as the population ages. Here are several excerpts of the article.

Three new studies, each of which presents a potential method for foretelling, years in advance, the memory loss and cognitive impairment that are the hallmarks of the debilitating brain disease.

The new studies propose that certain “biomarkers” of the disease may be detectable after it has begun to affect the brain, but before symptoms have become apparent.

The three studies target different biomarkers in different places: one in the blood, one in the cerebrospinal fluid, and one in the brain itself, as seen in PET scans. None of the tests are close to being available in doctors’ offices and clinics. All will require more years of research.

What they share is the potential to “help us understand the early stages of the disease,” says Dean Hartley, director of science initiatives for the Alzheimer’s Association—and to improve treatment.

Researchers believe that for perhaps as long as two decades before symptoms appear, the disease follows a steady, damaging course. It’s characterized by a buildup in the brain of clumps, or plaques, of beta-amyloid protein and somewhat later by twisted tangles of another protein called tau protein. By the time the Alzheimer’s diagnosis is made, the brain damage is already extensive.  “The earlier you are able to treat, the more you will be able to do to help, and the prognosis will probably be much better,” Hartley says.

For now, however, the options for treating Alzheimer’s are limited. The Food and Drug Administration has approved five drugs. All offer temporary relief for some people from the symptoms of Alzheimer’s, but none treat the underlying disease.

Harbinger in the Blood

Perhaps the simplest and least invasive test would be the blood test currently under development by researchers led by Howard Federoff, professor of neurology and executive dean of the Georgetown University School of Medicine. Federoff and his colleagues from six other medical institutions collected blood samples and administered cognitive and memory tests to 525 people aged 70 and over. They then repeated the tests annually.

At the start of the study, 46 participants had some cognitive impairment; by the third year, another 28 had developed symptoms. The researchers discovered that the people with impairment had lower levels of ten blood lipids, even at the beginning of the study, than those who had remained cognitively healthy. The blood lipid levels could distinguish, with an accuracy of over 90 percent, who would remain cognitively normal and who would develop symptoms of Alzheimer’s or of mild cognitive impairment over the next few years.

Blood lipids might predict Alzheimer’s even farther in advance than that, Federoff says; to find out, he and his team are hoping to get access to archival blood samples from an older longitudinal study.

The other two potential tests are more involved. Claudio Soto, director of the Mitchell Center for Alzheimer’s Disease and Related Brain Disorders at the University of Texas Medical School at Houston, has developed a test that detects misfolded beta-amyloid protein in tiny quantities in the cerebrospinal fluid of Alzheimer’s patients—but not in patients with other neurological diseases.

“What we have shown so far is that we can find these particles and you can differentiate” Alzheimer’s from non-Alzheimer’s patients, Soto says. His study suggests these tiny beta-amyloid particles may be precursors of the plaques in the brain that are characteristic of Alzheimer’s. He also wants to see if his technology can be applied to blood and urine samples—much easier to collect than cerebrospinal fluid, which requires a painful spinal tap.

PET scans can already detect beta-amyloid plaque in the brains of Alzheimer’s patients. In the third new study, Murali Doraiswamy, professor of psychiatry and director of the neurocognitive disorders program at Duke University, showed that PET scans using the radioactive dye Amyvid can predict a high risk for developing Alzheimer’s symptoms in patients that don’t yet have them.

“If there are no plaques, the dye has nothing to stick to, so the PET scan is negative,” Doraiswamy explains. “But if there are a lot of plaques,” they will show up on the scan.

At the start of the study, 152 adults aged 50 and over were given PET scans as well as cognitive tests. Three years later they repeated the cognitive tests. Those with positive PET scans had a much greater rate of cognitive decline and were more likely to have been diagnosed with dementia than those whose scans had been negative.

But even a positive scan is not a perfect predictor, Doraiswamy cautions: “It does not mean you’re going to get Alzheimer’s.”

To Know or Not To Know?

Once such tests become available, how do you decide whether to get one? “Counseling would be in order,” says Federoff. It would focus, he says, on establishing whether the patient is ready for the potential results of a test—and also prepared to act on them. Getting treatment is only one possible action; planning financially and for the care that will be needed are others.

Why Do We Overeat, and How Can We Stop?

Babies are born knowing to eat when they are hungry, and stop when they are comfortable. But as we grow up and are exposed to fad diets, advertising, food used as a reward, etc., many of us unlearn this beautifully balanced way of eating and begin to overeat. Yet eating when you are hungry and stopping when you are comfortable is one of the keys to ...