Had Enough Pesticides In Your Food? There’s More Coming! 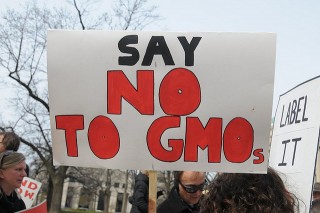 Commercial sale of genetically modified crops began in 1994, when Calgene first marketed its Flavr Savr delayed ripening tomato. To date, most genetic modification of foods have primarily focused on cash crops in high demand by farmers such as soybean, corn, canola, and cotton seed oil. These have been engineered for resistance to pathogens and herbicides and better nutrient profiles.

One of the “benefits” of genetically modified (GM) crops is supposed to be a significant reduction in the use of chemicals, such as highly toxic herbicides and pesticides.

The idea, theoretically anyhow, was that herbicide-tolerant and insect-resistant plants, which make up the majority of GM crops, would make it easier to kill weeds and diminish crop loss to harmful pests.

They would require farmers to use far less chemicals to control weeds and pests, so the pesticide companies, like Monsanto, assured us. In practice, however, this “promise” has been consistently broken.

In 2012, research showed that GM crops have led to a 404-million pound increase in overall pesticide use from the time they were introduced in 1996 through 2011. This equates to an increase of about 7 percent per year.

The excessive use of agrichemicals by farmers has now, in turn, led to herbicide resistance, both in weeds and pests, leaving farmers to struggle with an increasingly difficult situation. More than two dozen weed species are now resistant to glyphosate, the primary ingredient in Monsanto’s broad-spectrum herbicide Roundup.

But instead of getting to the bottom of the weed-resistance problem, which is the GM crops at its foundation, US regulators are adding fuel to the fire and getting ready to approve more GM crops that, ironically, call for even more use of herbicides…

From a regulatory perspective, GM crops are considered “substantially equivalent” to their non-GM counterparts. This means, in essence, that they are essentially the same, with no meaningful differences for your health or the environment.

The US Food and Drug Administration (FDA) has (so far) not required labeling of GM foods because they are deemed to be “substantially equivalent” to non-GM foods. It is also due to substantial equivalence that no oversight or long-term safety testing has been required of GM crops.

Because of the prevalence of soy and corn in processed foods, about 30,000 genetically modified food products sit on US grocery store shelves.

Here are the top 9 GM ingredients to watch for:

1. SOY
GM since: 1996
How widespread: 94 percent of the US soybean crop was genetically modified in 2011, according to the USDA.
What to watch for: Soybeans show up in many traditional (i.e. not organic) soy products, such as tofu, soy milk, soy sauce, miso, and tempeh, as well as any product containing the emulsifier lecithin (often derived from soybean oil), such as ice cream and candy.

2. COTTONSEED
GM since: 1996
How widespread: 90 percent of the US cotton crop was genetically modified in 2011, according to the USDA.
What to watch for: The cotton plant, genetically modified to be pest-resistant, produces not only fibers for fabric, but also cottonseed oil, available on US shelves as a standalone product, and also commonly used as an ingredient in margarine, in salad dressings, and as a frying oil for potato chips and other snacks.

3. CORN
GM since: 1996
How widespread: 88 percent of the US corn crop was genetically modified in 2011, according to the USDA.
What to watch for: GM corn can make its way into hundreds of products: breakfast cereals, corn-flour products (tortillas, chips, etc.), corn oil products (mayonnaise, shortening, etc.), and literally anything sweetened with high-fructose corn syrup, which covers sweetened fruit drinks, processed cookies and other snacks, yogurts, soups, condiments, and many other products.

4. CANOLA OIL
GM since: 1996
How widespread: 90 percent of the US canola crop was genetically modified in 2010, according to the New York Times
What to watch for: Any canola oil made in the USA. This popular cooking oil, originally derived from rapeseed oil by breeders in Canada (the name is a contraction for “Canadian oil, low acid”) comes from a genetically modified plant that is no longer simply cultivated, but grows wild across the Dakotas, Minnesota, and Canada.

5. U.S. PAPAYA
GM since: 1998
How widespread: 80 percent of the US papaya crop was genetically modified in 2010, according to the New York Times.
What to watch for: All papaya grown in the US. Hawaiian papaya was genetically engineered to withstand the ringspot virus in the late 1990s, with the GM version rapidly taking over the industry. In 2009, the USDA rescinded regulations prohibiting GM papaya on the US mainland; they have since been introduced to Florida plantations.

6. ALFALFA
GM since: In 2005, the USDA deregulated GM alfalfa, though cultivation was later halted in 2007, following lawsuits from the Center for Food Safety and others who demanded a full evaluation of the threats to conventional alfalfa plants, and the emergence of herbicide-resistant weeds. Following a new environmental impact study, the USDA in 2011 again deregulated GM alfalfa, which is grown primarily as feed for dairy and sometimes beef cattle.
How widespread: Data on the re-introduction of GM alfalfa in 2011 will be available from the USDA in July. At present, GM alfalfa is used primarily as hay for cattle. The Monsanto Technology Use Agreement for “Roundup Ready” GM alfalfa forbids its use for sprouts.
What to watch for: It’s difficult to tell from a meat or dairy product whether it is from cows fed GM alfalfa. Look for organic dairy products and organic or 100 percent grassfed meat. An even better option is to go vegetarian or vegan.

7. SUGAR BEETS
GM since: 2005
How widespread: 95 percent of the US sugar-beet crop was genetically modified in 2009, according to the USDA. Around half of the sugar produced in the US comes from sugar beets.
What to watch for: If a non-organic bag of sugar or a product containing conventional sugar as an ingredient does not specify “pure cane sugar,” the sugar is likely a combination of cane sugar and GM sugar beets.

8. MILK
GM since: 1994
How widespread: Recombinant bovine growth hormone (rBGH) is a GM synthetic hormone injected into dairy cows to boost milk production. 17 percent of US cows were injected with rBGH in 2007 (most recent figure). Milk from rBGH-treated cows contains elevated levels of Insulin Growth Factor-1, a hormone linked to increased risks for certain cancers.
What to watch for: No label is required for milk from rBGH-treated cows, though many brands of non-treated milk label their containers as such.

9. ASPARTAME
Genetically modified since: 1965
How widespread: Aspartame, an artificial sweetener, is derived from GM microorganisms. It is found in over 6,000 products, including diet sodas.
What to watch for: Avoid anything labeled as containing Nutrasweet, Equal, or aspartame.

The best way to get your daily dose of vitamins and minerals is to head to your local grocer or supermarket. The  most imortant change in your eating habits – if you aren’t doing this already – is to make a major portion of what you eat every day to include fruits, vegetables, seeds and nuts. Let’s just have a look at cucumbers. Cucumbers ...