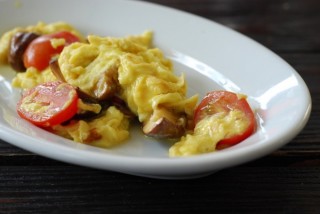 How much protein should be included in your daily diet and how much should be included with each meal has been the subject of continuing debate. The study below is suposed to lay this matter to rest, once and for all. See if you agree.

Most Americans eat a diet that consists of little to no protein for breakfast, a bit of protein at lunch and an overabundance of protein at dinner. As long as they get their recommended dietary allowance of about 60 grams, it’s all good, right?

Not according to new research from a team of scientists led by muscle metabolism expert Doug Paddon-Jones of the University of Texas Medical Branch at Galveston. This research shows that the typical cereal or carbohydrate-dominated breakfast, a sandwich or salad at lunch and overly large serving of meat/protein for dinner may not provide the best metabolic environment to promote healthy aging and maintenance of muscle size and strength.

The new study, now online in press in the Journal of Nutrition, shows that the potential for muscle growth is less than optimal when protein consumption is skewed toward the evening meal instead of being evenly distributed throughout the day.

Age-related conditions such as osteoporosis (bone weakening) and sarcopenia (muscle wasting) do not develop all of a sudden. Rather they are insidious processes precipitated by suboptimal lifestyle practices, such as diet and exercise, in early middle age, the study states.

The study’s results were obtained by measuring muscle protein synthesis rates in healthy adults who consumed two similar diets that differed in protein distribution throughout the day. One of the diets contained 30 grams of protein at each meal, while the other contained 10 grams at breakfast, 15 grams at lunch and 65 grams at dinner. Lean beef was the primary nutrient-dense source of protein for each daily menu. Using blood samples and thigh muscle biopsies, the researchers then determined the subjects’ muscle protein synthesis rates over a 24-hour period.

The UTMB researchers provided volunteers with a generous daily dose of 90 grams of protein — consistent with the average amount currently consumed by healthy adults in the United States. While very active individuals may benefit from a slightly higher protein intake, the team’s previous research suggests that, for the majority of adults, additional protein will likely have a diminishing positive effect on muscle metabolism, while any less may fail to provide optimal muscle metabolism support.

The results of the study, Paddon-Jones points out, seem to show that a more effective pattern of protein consumption is likely to differ dramatically from many Americans’ daily eating habits.

“Usually, we eat very little protein at breakfast, a bit more at lunch and then consume a large amount at night. When was the last time you had just 4 ounces of anything during dinner at a restaurant?” Paddon-Jones said. “So we’re not taking enough protein on board for efficient muscle building and repair during the day, and at night we’re often taking in more than we can use. We run the risk of having this excess oxidized and ending up as glucose or fat.”

A more efficient eating strategy for making muscle and controlling total caloric intake would be to shift some of the extra protein consumed at dinner to lunch and breakfast.

“You don’t have to eat massive amounts of protein to maximize muscle synthesis, you just have to be a little more thoughtful with how you apportion it,” Paddon-Jones said. “For breakfast consider replacing some carbohydrate, particularly the simple sugars, with high-quality protein. Throw in an egg, a glass of milk, yogurt or add a handful of nuts to get closer to 30 grams of protein, do something similar to get to 30 for lunch, and then moderate the amount of protein for dinner. Do this, and over the course of the day you will likely spend much more time synthesizing muscle protein.”

MORE THAN 7.5 MILION COUNTER BOOKS IN PRINT FROM THE NUTRITION EXPERTS

Put the latest protein recommendations to work for you.

Every day your body must build and replace millions of cells—an impossible job without proteins. The amount you need changes with exercise, stress, weight loss, illness, injury, and pregnancy. That’s why your body is counting on you to eat the proteins it needs to maximize fitness, boost your immune system, protect you from chronic disease, help you lose weight and keep it off, and much more. The completely revised and updated Protein Counter will help you individualize a protein plan to keep your body active, strong, and healthy. u Protein, fat, carbohydrate, and calorie counts for more than 15,000 brand-name and generic foods, including hundreds of energy bars and drinks

Three easy steps to determine how much protein you should eat daily
New information on protein and weight loss, including why you can’t be healthy without the right amount
Tips for using protein to maximize your physical output
Simple ways to meet your protein needs without eating meat

The Protein Counter, 3rd Edition, is as essential to your gym bag as a water bottle!

Gum disease may begin pretty predictably with poor diet and dental hygiene. However treating it without attacking these factors first has proven to be a tough job. This article reveals efforts to produce a new treatment “a promising drug for treating humans with gum disease.” Periodontitis is a form of gum disease that damages the soft ...