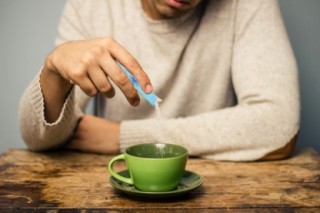 Many people are careful about their sugar intake. This is no surprise, given the epidemic proportions of rising type 2 diabetes statistics. Doctors have encouraged the use of artificial sweeteners to replace sugar, but these products have brought their own problems. Much has been brought to light about the dangers accompanying aspartame use. Now, a new danger has surfaced – linking aspartame use with Alzheimer’s. Read the informative excerpts below. You can read the entire article by clicking here.

Aspartame is also the number one source of side effect complaints to the US Food and Drug Administration (FDA), with over 10,000 complaints filed and over 91 documented symptoms related to its consumption.

Most recently, studies are also starting to confirm lingering suspicions that artificial sweeteners like aspartame may play a role in the development of Alzheimer’s disease, a serious form of dementia that is now thought to kill over half a million Americans each year.

The key mechanism of harm appears to be methanol toxicity—a much-ignored problem associated with aspartame in particular.

In a previous interview, toxicology expert Dr. Woodrow Monte (author of the book While Science Sleeps: A Sweetener Kills), explained the links between aspartame and methanol toxicity and the formation of formaldehyde. In light of the latest research, this interview is more relevant than ever, which is why I included in the video above.

Aspartame is primarily made up of aspartic acid and phenylalanine—the latter of which has been synthetically modified to carry a methyl group. This is what provides the majority of the sweetness. That phenylalanine methyl bond, called a methyl ester, is very weak, allowing the methyl group on the phenylalanine to easily break off and form methanol. Your cells also contain alcohol dehydrogenase (ADH), which converts methanol to formaldehyde. The formaldehyde is free to do enormous amounts of damage in your tissues.

“Like aspartame, advantame contains phenylalanine, which is metabolized with difficulty by people with a rare genetic disorder, phenylketonuria. But because of its intense sweetness, advantame would be used at much lower volumes than is asparatame. As a result, the FDA has declared that it can be safely consumed by those with phenylketonuria.”

Where Is Sugar Hiding?

Sugar can be hidden in the most unlikeliest of foods. We found a revealing article in The Huffington Post, naming 5 of these food hideouts. 1. Salad Dressing 2. “Healthy” Oat Cereal 3. Flavored Yogurt 4. Dried Fruit 5. Sauces and Marinades for the Grill The author, David Zinczenko, (The New York Times best-selling author of Eat It to ...