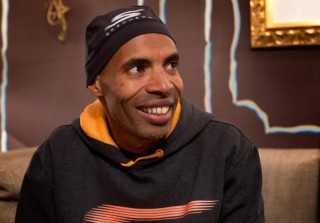 Meb Keflezighi’s new book is a guide for runners training for the marathon. He is the 2014 Boston Marathon winner and an Olympian. (Robin Lubbock/WBUR)

Meb Keflezighi has been running at a world class level for more than a decade, going back to his first Olympic Games in 2000. He knew he wasn’t ready to win a medal in that race, but he knew that if he kept training and working hard someday the medals and the victories would come. They have.

He won a silver medal in the 2004 Olympic Marathon in Athens. Five years later he won the New York Marathon. He finished in the top 10 twice in the Boston Marathon and then just missed a medal in the 2012 Olympic Marathon in London. Two years later he made history when he won the Boston Marathon, the first American to do that in the men’s open race since 1983.

He writes about the methodical way he’s been able to thrive, even as he approaches 40, in his new book “Meb For Mortals: How To Run, Think and Eat like a Champion Marathoner,” written with Scott Douglas of Runner’s World Magazine. If you’re a regular runner, you’ll find great value in this book. There’s no magic here, just the basics of hard work and setting realistic goals. Keflezighi has done that throughout his long and successful career.

Last April, I barely mentioned his name when I previewed the 2014 Boston Marathon. That won’t happen this month.

By Meb Keflezighi with Scott Douglas

How to Improve Your Running Form

ALTHOUGH I disagree with the idea that your body will find its best form if you run enough, there’s no denying that your form will probably improve naturally as you get more experienced. As you get fitter, you’re more likely to feel smoother. You’ll learn how to better carry yourself so that you get through your increased mileage without cramping or tightness. So if you’re relatively new to running or have never run more than a few miles a few times a week, upping your mileage will eventually lead to better form.

Once you have that basic running fitness, form drills can greatly improve how you run. At the end of this chapter you’ll see descriptions of the form drills I do regularly. Most of these involve exaggerating one or more elements of good running form. Others help teach you how to improve your stride length or stride rate or both.

Again, you don’t want to be doing all this form checking all the time and winding up with a stiff neck. Have fun on your runs! But you need just a few seconds to evaluate how you’re doing and what you might be able to do better. After a while, these quick scans become a habit and an integral part of becoming a better runner.

Excerpted from the book MEB FOR MORTALS by Meb Keflezighi with Scott Douglas. Copyright © 2015 by Mebrahtom Keflezighi. Reprinted with permission of Rodale Books.

Click here to read the entire article and book excerpt.

Meb For Mortals: How to Run, Think, and Eat like a Champion Marathoner

With his historic win at the 2014 Boston Marathon, Meb Keflezighi cemented his legacy as one of the great champions of long-distance running. Runners everywhere wanted to know how someone two weeks away from his 39th birthday, who had only the 15th best time going into the race, could defeat the best field in Boston Marathon history and become the first American man to win the race in 31 years.

Meb For Mortals describes in unprecedented detail how three-time Olympian Keflezighi prepares to take on the best runners in the world. More important, the book shows everyday runners how to implement the training, nutritional, and mental principles that have guided him throughout his long career, which in addition to the 2014 Boston win includes an Olympic silver medal and the 2009 New York City Marathon title.

Dr. Mercola lists the items in our lives we normally consider safe – and provides ample evidence that at least 10 of those belong in the trash can! He provides safe alternatives instead. Each and every day, you come into contact with a large number of items—many of which have health risks that can accumulate over time. Many chemicals appear ...