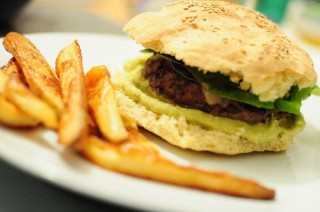 Researchers at the University of California-San Diego School of Medicine report findings on the role a sugar specific to red meat may play in forming tumors in humans.

The team first conducted a systematic survey of common foods and found that red meats – beef, pork and lamb – are rich in a sugar called Neu5Gc and provide the primary sources of this sugar in the human diet. The sugar molecule  naturally occurs in animals but not humans could be the reason why people are at higher risk for cancer when they consume red meat

While people who eat a lot of red meat are at a higher risk of certain cancers, other carnivores are not. This is why scientists decided to investigate the possible tumor-forming role of a sugar in humans, called Neu5Gc, which is naturally found in most mammals but not in humans.

In this latest study, the researchers fed NEu5Gc to mice engineered to be deficient in the sugar, like humans. In the end, they found that the mice fed this sugar were significantly more at risk for developing spontaneous cancers. This, in particular, is a key link between red meat consumption and cancer.

The researchers had previously discovered that animal Neu5Gc can be absorbed into human tissues. In the newest study — published in the early edition of Proceedings of the National Academy of Sciences — they hypothesized that eating red meat could lead to inflammation if the body’s immune system is constantly generating antibodies against consumed animal Neu5Gc, a foreign molecule. Chronic inflammation is known to promote tumor formation. It becomes part of your own cells. When you react to a peanut or other allergy-causing substance, you’re reacting to something foreign. This is the first example we know of something that’s foreign, gets totally incorporated into you despite the fact that your immune system recognizes it,” lead author of the study explained.

“Until now, all of our evidence linking Neu5Gc to cancer was circumstantial or indirectly predicted from somewhat artificial experimental setups,” said Ajit Varki, one of the researchers, in a news release. “This is the first time we have directly shown that mimicking the exact situation in humans-feeding non-human Neu5Gc and inducing anti-Neu5Gc antibodies-increases spontaneous cancers in mice.”

Apart from red meat, Neu5Gc is also present in milk, fish, eggs and some forms of cheese. The researchers recommend the consumption of these foods in moderation as an attempt to prevent cancer.

“The final proof in humans will be much harder to come by,” said Varki. “But on a more general note, this work may also help explain potential connections of red meat consumption to other diseases exacerbated by chronic inflammation, such as atherosclerosis and type 2 diabetes. Of course, moderate amounts of red meat can be a source of good nutrition for young people. We hope that our work will eventually lead the way to practical solutions for this catch-22.”

These findings seem to be in addition to previous beliefs that red meat causes cancer due to harmful chemicals which are released when it is grilled. Many other studies have already linked the consumption of red meat to certain forms of cancer such as prostate cancer, breast cancer, ovarian cancer, lung cancer and colon cancer.

In August, Medical News Today reported on a study suggesting that the increased risk of colorectal cancerassociated with eating red meat may be reduced by consumption of resistant starch.

The researchers behind that study suggested, therefore, that by adding natural sources of resistant starch – bananas, beans, chickpeas, lentils, whole grains – to a diet high in red meat, the increased risk of colorectal cancer may be diminished.

Another study in 2014 also suggested that higher red meat intake during early adulthood was associated with a 22% increased risk for breast cancer.

That study found that replacing one portion of red meat a day with a portion of another high-protein food – for instance, legumes, poultry, nuts or fish – was associated with a 14% lower risk of breast cancer.

The researchers, however, also emphasize on the fact that red meat does have a good nutritive value- it is a rich source of iron and individuals less than 40 years of age in particular, could have benefits of its consumption. However, for those over 40 years of age, it could have more negative effects on health than benefits.

A cup of coffee in the morning may pack more than just an energy boost. The consumption of coffee goes back centuries. In 17th century England the popularity of the drink gave rise to a number of coffee houses which were dubbed ‘penny universities’, because with one penny a person could buy a cup of coffee and have intellectually stimulating ...