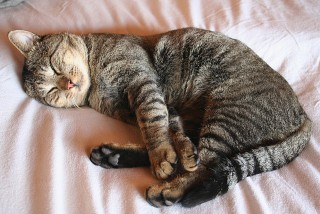 Secret Revealed About Your Sleep Position

Couples who snuggle in bed as they sleep are happier than couples who sleep far apart without touching, according to British researchers, who say that your sleeping position reveals wonders about the quality of your relationship.

Sleep positions and what each says about a couple’s relationship.

The study: Led by Richard Wiseman, a psychology professor at the University of Hertfordshire in the United Kingdom, the team collected data from 1,000 people who were part of a love relationship, asking each about his or her preferred sleeping position. In addition, all were asked to rate the quality and happiness of their relationship.

The results: Put quite simply, one of the most important indicators of happiness involves touching. Fully 94 percent of couples who sleep touching one another are happy with their relationship, compared with 68 percent who are happy but do not touch during the night.

Fun facts to know and tell about sleep position:

“The results allow people to gain an insight into someone’s personality and relationship by simply asking them about their favorite sleeping position,” Wiseman said in a news release announcing the study findings.

Adding weight-training to your regular aerobic routine could help prevent or control belly fat over the years. While a heart-thumping, high-octane spinning class or long run outdoors burns plenty of calories, aerobic exercise may not be enough to keep an expanding waistline in check. A new study says it takes weight training, too. Researchers ...