Which Fruits And Vegetables Are Loaded With Pesticides? 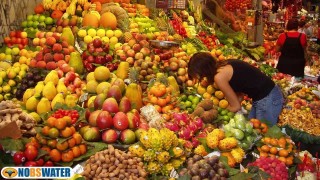 What fruits and vegetables have the most pesticides and which have the least? Here is an up to date review.

It may look like an apple, peach, strawberry, potato or celery, but there is something else lurking there.

Something invisible. And icky.

When you eat that sweet strawberry or crunchy celery, you’re also eating a mouthful of pesticides, according to the Washington, D.C.-based Environmental Working Group (EWG).

What is the harm of pesticides? Pesticides are toxic by design and created expressly to kill living organisms–insects, plants and fungi that are considered “pests.” Many pesticides pose health dangers to people and have been linked to brain and nervous system toxicity, cancer, hormone disruption, skin and eye and lung irritation.

You can lower your pesticide consumption by nearly four-fifths by avoiding the most contaminated fruits and vegetables and instead eating the least contaminated produce, according to calculations made by EWG.

To rank the produce items, EWG analysts used six metrics, including the total number of pesticides detected on a crop and the percent of samples tested with detectable pesticides. They first washed or peeled the samples prior to testing so the rankings would reflect the amounts of the crop chemicals likely present on the food when it is typically eaten by U.S. consumers.

Fun facts to know and tell:

What can you do to protect yourself? The Environmental Working Group recommends buying organic produce to reduce the chance of ingesting pesticide residue. But even organic does not mean pesticide-free.

We call your attention to this ever growing threat. It has already come upon our shores. World Health Organization officials reported today that hospitals in the United Arab Emirates experienced breaches in infection control measures, thus worsening the current MERS virus outbreak by infecting over 60 additional people. Already a major issue in the ...