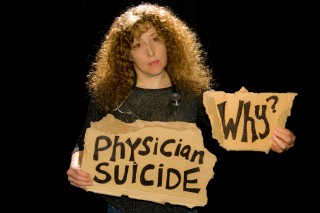 Why would a successful professional person lose their desire to live – and actually cut off their ties with the living? At first glance one can surmise that depression must have played some role. The person must have felt no further desire to live within various psychological constraints born from some continuing pressure and criticism. Lets see if some of the newsposts below can shed some light on this troubling topic?

Check out this (MedPage Today)(http://www.medpagetoday.com/Psychiatry/Depression/48487

“What can be learned from doctors’ suicides? Family physician Pamela Wible, MD, performs four “psychological autopsies” on physicians who have taken their own lives. “There are tough final exams. There are grueling final exams. And then there is the test at the nation’s medical school for the military, in which students must navigate a simulated overseas deployment culminating in a staged mass-casualty incident with deafening explosions, screaming, smoke, gunfire and fake blood everywhere.”

“NEW HAVEN — TWO weeks ago, two medical residents, in their second month of residency training in different programs, jumped to their deaths in separate incidents in New York City. I did not know them, and cannot presume to speak for them or their circumstances. But I imagine that they had celebrated their medical school graduation this spring just as my friends and I did. I imagine they began their residencies with the same enthusiasm for healing as we did. And I imagine that they experienced fatigue, emotional exhaustion and crippling self-doubt at the beginning of those residencies — I know I did.”

“I’ve been a doctor for twenty years. I’ve not lost a single patient to suicide.
I’ve lost only colleagues, friends, lovers — all male physicians — to suicide.
Why?
Here’s what I know:”

“An obstetrician is found dead in his bathtub; gunshot wound to the head. An anesthesiologist dies of an overdose in a hospital closet. A family doctor is hit by a train. An internist at a medical conference jumps from his hotel balcony to his death. All true stories.
What are patients to do?”

Dr. Mercola provides compelling evidence about the real causes of our national obesity epidemic. The prognosis for the nation is bad and getting worse as obesity takes its toll on the health of adults and children alike. One of the biggest health stories of the year has been the rise in obesity among both adults and children in the U.S. We’ve ...