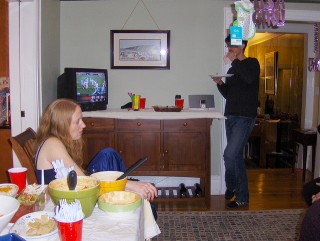 Television (TV) and most recently computers, have generally been blamed for helping make Americans overweight owing to both its distracting influence and its encouragement of a sedentary lifestyle. Indeed, a recent correlational analysis of dinner patterns illustrated that the frequency of TV viewing during dinner was one of the 2 largest correlates of adult and child body mass index. In a  recent study, a team of researchers has stated that Hollywood action flicks are bad for health as it increases consumption of food by the viewers.The major problem is using unhealthy snacks. The lesson here is to snack on healthy snacks when watching your favorite action movies  – and you can eat all you want.

It is no secret that TV viewing encourages mindless snacking, but it turns out that this effect may be particularly pronounced when it comes to watching certain types of shows. A new study has found that people watching a Hollywood action movie ate twice the amount of snacks as those watching an interview program.

The study, published Monday in the Journal of the American Medical Association: Internal Medicine, included 94 undergraduate students who were split in three groups to watch 20 minutes of TV. Each group was randomly assigned to watch either an excerpt from “The Island,” an action flick starring Ewan McGregor and Scarlett Johansson; an identical excerpt from “The Island” but without the sound; or the interview program “The Charlie Rose Show.”

The participants were provided with M&Ms, cookies, carrots and grapes to snack on while watching the shows. The investigators weighed the snacks before and after the initial part of the experiment to see how much the people in each group had eaten.

The researchers found that people who watched the action movie with sound on ate 206.5 grams of food — almost twice as much as those watching the interview program, who ate 104.3 grams.

“We find that if you’re watching an action movie while snacking your mouth will see more action too!” study author Aner Tal, a post-doctoral research associate in the Food and Brand Lab at Cornell University, said in a statement.